Establishing Rules For the Whole Family 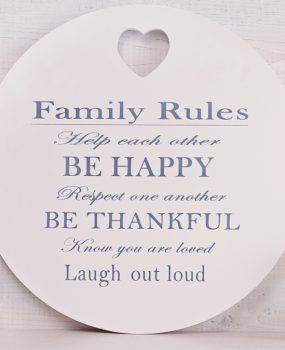 The militaristic approach just doesn’t work today. We live in a more relational culture. Most parents today have better relationships with their children than parents did before…but while that’s largely a good thing, there is a downside as well. If teens don’t “buy in” to the rules, the relational approach makes enforcing those rules more difficult.

So, here are some ideas for successfully creating rules for your household.

The earlier you start this process the better. If there’s still time for you to do this while your children are still tweens, it will be easier than if you wait until they’re old enough to drive. If yours is already in the teens, start today. Preferably before the sun goes down.

Have your teenager help you establish the rules and consequences.

If you establish the rules unilaterally, especially if your home has been relationally focused, you’ll probably face significant push back from your teen. They aren’t going to understand why they have no say in the process and they’ll be less likely to follow the rules as a result. Sit down together and discuss what you think behavior in your home should look like. This is a time to turn off the cell phones, the television and the laptop and focus on what you’re doing. Talk about how your family expects to deal with issues like dating, driving, cell phones, church, school work, friends, media . . . the list can go on and on, but be sure to major on the majors. Discuss (don’t dictate) what kinds of behavior fits with your family’s values and which don’t, and include some rules for the adults in the family as well, so the kids don’t think this process is just targeting them. Talk through the reasons behind the rules that you are establishing and get everyone’s opinion about what consequences should be applied for breaking the rules. You’ll be surprised how tough your kids will be on themselves when consequences are being discussed, so you might have to lessen them to be realistic. There are some warning signs that point to great trouble ahead. Disrespect and dishonesty are two of those for which violations should have clear and steep consequences, so that your teens know what to expect if they cross one of those lines. So, tackle those first. Never bend on character or moral issues, but allow some slack in other areas so your teen feels there is some give and take. The point is this, by getting their input in drawing up this document, you are giving them a sense of ownership of the rules and foreknowledge of what consequences to expect. It allows them to weigh the consequences against breaking the rules. So, as you work through this process over several weeks, have the final document typed and printed out so that it is clear for everyone to see.

Allow the consequences to play out.

Once you have laid down the rules and the consequences with your children, don’t back down when it comes to enforcing them. Teens are masterful at trying to get exceptions made “just this once.” Parents are often afraid that if they enforce the consequences that have been set they will damage their relationship with their child. The truth is just the opposite. Kids actually want their parents to be consistent, and they can live with the consequences, so let them be involved in setting those consequences. It is also appropriate to remind them when they step over the line that they chose the consequences and will now have to live with them.

Don’t think of your rules as written in stone. That’s one of the nice things about having them on your computer; they can be easily adjusted over time. So check your rules every six months to make sure they still apply to the maturity of your child. Sometimes parents don’t adjust the rules and they make the mistake of holding a sixteen year old to the same exact rules they had for him as a twelve year old. This can be exasperating for an older teen. I’m not suggesting you let him do things that are wrong. But some things that are procedural can be relaxed as they mature. For instance, bedtime and curfew can be moved to a later hour, more independence and decision making can be transferred, and more responsibility can be added. There are obviously limits, however. There is some truth to the old saying that nothing good ever happens after midnight. For example, as your kid gets older, you might move their curfew, but not past midnight. It’s a very positive thing when you show some flexibility. The problem some parents have is that they aren’t willing to change on anything. The world has changed, and you want to be sure you’re only holding on to the things that are worth holding on to—and not holding on to things just because “that’s the way it was when I was growing up.” Above all else, work diligently to keep your relationship strong. As you can probably tell, rules are really important, but the relationship you have with your child is even more important. Take the time to involve them and help them take ownership of the rules. You’ll find the fights decreasing and the relationships and harmony in your home increasing. It’s worth the effort!

Should you need help finding therapeutic schools near me or reform schools or boarding schools or Christian boarding schools, please let us know. Therapeutic programs and schools like this will provide treatment for troubled teens. Boarding Schools (Emotional Growth Schools and Therapeutic Boarding Schools) provide supervision and counseling for at-risk teenage boys and girls. Rehabs for teens provide addiction counseling and drug abuse recovery. Residential Treatment Centers offer clinical treatment with both academic and behavioral support, plus medication management and medical monitoring. They treat adolescents with serious psychological and behavioral issues, are highly structured, and they offer recreational and adventure activities.

Most parents today have better relationships with their children than parents did before. While that’s largely a good thing, there is a downside as well.