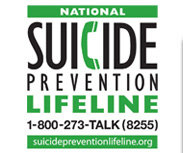 The National Suicide Prevention Lifeline is a toll-free, 24-hour, confidential hotline for suicide prevention, which targets everybody who is in emotional distress or suicidal crisis. Just by calling the hotline, anybody’s call is directed to the crisis center, which is nearest the origin of the call. The National Suicide Prevention Lifeline has at least 150 crisis centers nationwide. It offers mental health referrals and crisis counseling 24/7. Established and run by Link2Health Solutions, Inc., the hotline is a subsidiary of the Mental Health Association of New York City.

A person can either call the 1-800-273-8255 to reach a crisis worker. For suicidal crisis or medical emergency, the caller can also call 911. For the hearing impaired, they can call 1-800-799-4889. TTY services are offered in at least 25 crisis centers nationwide. For non-English speaking callers, they can call 1-800-628-9454 for Spanish speaking persons. The hotline can also offer interpreters, which support at least 150 languages. The National Suicide Prevention Lifeline also services those who call the 1-800-SUICIDE number. The hotline is available all throughout the United States of America.

The Lifeline Chat is also available for people who are considering suicide; those who just want to talk; those going through some rough times; and those depressed. There are chat counselors available to service their needs. Currently, the service is only available from 5pm to 1am EST because it was just started in March 2012. The pilot service will run through September 2012. People can still try the 1-800-273-8255 number if the chat service is busy.

The National Suicide Prevention Lifeline also has presence in Facebook. A suicidal person can be reported by commenting at the suicidal user’s thread or through the Facebook Help Center. A Facebook Safety Team will then review the message and will respond via email and encourage the person to call the hotline.