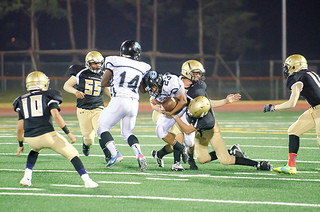 Who doesn’t love a high school football game, particularly one where your team gets the big win? While obviously this feels like a cause for a major celebration, underage drinking can often bring that party to a screeching halt. From DUI’s to an arrest record, drinking while under 21 can often have huge ramifications for the rest of your child’s life. By understanding the possible outcomes, you can be prepared to discuss them with your teenager before it happens.

While many high schools do have a policy on underage drinking, a lot can depend on if the incident happened on school grounds or if it happened during a school-sponsored trip. Often these days, highschoolers are made aware that if they are caught with alcohol there will be a loss of certain privileges, such as the ability to attend school dances or participate in sports activities.

However, certain high schools may also have stricter rules such as expulsion, which can seriously affect your teen’s ability to go to the college of their choice.

Did the Drinking Result in an Arrest or DUI?

Driving under the influence of alcohol is a serious enough charge for an adult, but can lead to even worse results for a young person just starting out in life. A Philadelphia DUI attorney says that, “the process of fighting your charge can be stressful, and the results of a DUI conviction could be life-changing.”

While mistakes do happen and teenagers often exhibit poor judgement, there are many colleges and future jobs that will take a dim view of a candidate with an arrest record. It is important to discuss these concerns with your attorney, as there are often more lenient sentences for first time offenders.

Did Your Child Injure Themselves While Intoxicated?

While an automobile accident can certainly result in injury for a drunk teenager, it’s also important to be aware of how slips, trips and falls while intoxicated can also seriously sit your teen on the sidelines for the rest of the season. This could be detrimental to any budding football or basketball star, particularly if they are in the process of applying for those all-important college scholarships.

Encourage your child to be honest with you regarding the possibility of an injury they sustained while drinking, as this will help you to ensure they get the urgent care they may need.

One of the best things you can do for your high school student is ensure they know the possible ramifications, both legal and injury-wise, before they choose to drink. By arming them with the knowledge they need, they will be better equipped to make good choices that will keep them in the game and on the right path.

Debbie Nguyen is a freelance graphic designer and blogger in the Atlanta area. She is mother to a high school athlete who is working toward college scholarships, which means keeping his record spotless. Philadelphia DUI attorney Steven E. Kellis helps teens in the Philly area when they are faced with DUI charges.