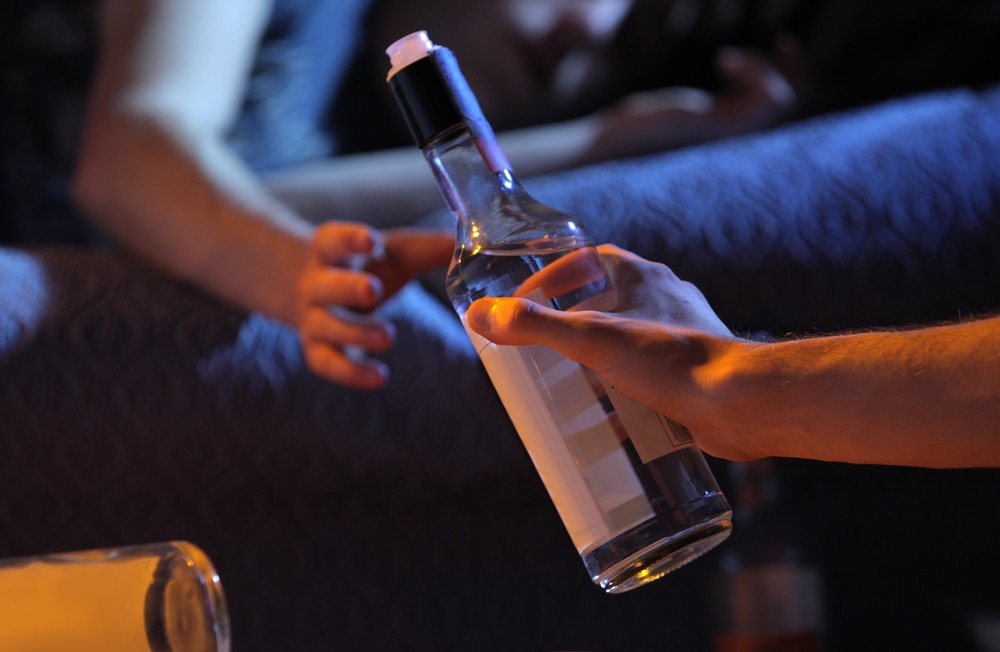 If you’ve seen an inexplicable change in your 10- to 14-year-old’s honesty, thinking, sleeping habits, behavior, grades, attentiveness, or circle of friends, it may not be normal teenage hormones.

It could be that they are experimenting with one or more of a wide variety of intoxicating substances that are as close as your kitchen drawer, medicine cabinet or garage. The teen and tween culture is bent on experimenting with every form of intoxication out there. In fact, 95% of high school kids will get high from one substance or another sometime in their high school years; nearly half will try marijuana. In fact, there’s a throwback among teens right now to the 60’s “hippie” culture, marked by an increased popularity and use of heroin and LSD (“acid”), as well as “pot” (marijuana), which is readily available in most schools and today it is up to ten times more potent than it was just a few years ago. Authorities report that people in their teens and early 20s are being targeted as the next big market for heroin, a drug that has long been in decline among adult populations. In some places, teens report that heroin is even more accessible than marijuana or alcohol. Marijuana and other illicit drugs get a lot of news coverage, but there are other less sinister, but potentially more dangerous, sources of getting high, including potent concoctions of common household glues, solvents and aerosols, prescription pain medications like Oxycontin and Vicodin, or even some of the plants found in your yard. Some kids are even getting a buzz off of massive doses of certain vitamins. Kids think they’re invincible, so they’ll try anything their friends try and their badge of courage is all the different substances they’ve tried. They learn about every source of intoxication from the Internet. So, they could be experimenting with huffing aerosol propellant, glues, gasoline, or paint. Or, they could be crushing cold medications and sniffing them like cocaine or guzzling liquid cold medicines. Or, they may not take anything at all and just play the “choking game” to get a temporary high. Still others experiment with the harder illegal drugs like ecstasy, crystal meth, crack, cocaine, LSD, or heroin, which are all highly addictive.

When Does It Start?

Most teenagers who are involved with drugs say their experimentation began in the 7th or 8th grade; and some as early as the 5th or 6th grade. Most say they got introduced to drugs or alcohol when staying overnight at a friend’s home or at other overnight youth events; or, at their friend’s house after school when their parents weren’t home. Others were introduced to drugs or alcohol when attending parties – usually parties where older teens are present and parents are absent, distracted, or don’t care. Parents today who allow their teenagers to stay overnight with friends are asking for some serious experimenting of all varieties. After the parents are asleep, the kids try to outdo each other in regard to how far they will go, armed with the latest vices and stories from the Internet. That’s why I recommend that slumber parties stop at age ten. From then on, the normally innocent agenda of pizza and pillow fights, tends to shift to more sinister things. While most parents first catch on that their child is using drugs in the later teen years, the teen has usually been at it for several years. But if kids haven’t experimented with intoxicating substances by age 14, they’re less likely to get started at all, so it’s important for parents to be the most vigilant in the critical tween and early teen years. This goes for most recreational drugs except prescription pain killers, whose addiction can happen quickly and at any age.

There’s a difference between experimenting with drugs and being addicted. Experimenting is no less dangerous, however, since we hear stories every day of deaths of first-time users. And experimenting with any drug that produces a “high” can lead to addiction if it goes on long enough. Some drugs are so addictive, that they can lead to a lifetime addiction with their very first use. There’s nothing more gut-wrenching for a parent than to deal with their teenager’s drug addiction. Just watch a few episodes of the show “Intervention” on television and you’ll see what living with an addict is like. It’s a constant nightmare, not just for the teen, but for the entire family. The lying, stealing, fits of anger, run-ins with the law and constant fear that the child will overdose can destroy and bankrupt a family. And it won’t get better without treatment and ongoing support, sometimes spanning the addict’s entire life. Sadly, each year more than a million teenagers are admitted to substance abuse treatment programs. And just like alcoholism, many of them will struggle with the addiction their entire life and relapse again and again. That’s why it’s far better for parents to prevent kids from experimenting with drugs early on, before they get a foothold.

Why Do They Experiment?

Why do kids experiment with drugs? Often they are motivated out of curiosity and the need to fit in. They want to try what their friends are trying, and they have a great need to belong. But other kids experiment because they are seeking something to cover up their anxiety or emotional pain. In essence they are self-medicating. For instance, kids who use marijuana are often doing so to seek its perceived calming and soothing effect. But studies show that the prolonged use of the drug has the opposite effect, leading to heightened anxiety, depression, nervousness, mental disorders, paranoia and panic attacks. Like a Trojan horse, most drugs eventually lose their effectiveness and require higher and higher doses or more addictive drugs for the user to feel the same high as before. And that’s when parents usually discover the teen has a problem. While some parents diminish the seriousness of pot use, they should pay attention to what the National Institute on Drug Abuse says can be its effects. They say, “Some short- and long-term marijuana users have experienced impaired attention, memory problems, and diminished learning capacity. For young people, these effects can have especially serious consequences – as chemicals found in marijuana can interfere with the formation of memories and the ability to retain knowledge. In addition, some frequent users display what is called “amotivational syndrome” or “burnout,” which is characterized by a general apathy toward life events. After prolonged use, heavy users often appear dull, distracted, and lethargic – and some can even become unaware of their surroundings. Burned-out users may also suffer from poor coordination, decreased sex drive, diminished interpersonal skills, and poor judgment.” Sadly, kids with more serious emotional and psychological problems turn to dangerous concoctions or massive doses of drugs as a form of “Russian Roulette.” They reason, “If I die, then so be it.” Sometimes these are intentional suicidal events, but most are unintentional or caused by the mixture of drugs and alcohol. Alcohol alone can be lethal in high quantities.

Before Counseling, Get the Drug Use Under Control

What many parents don’t seem to realize is that drug use may be the underlying reason they are seeing behavioral issues in their teen. So all the counseling help in the world will have little positive effect until the drug use is stopped and the lingering effects of the drug is out of the teenager’s system. Depending on the drug that was used, the after-effects can last several months. Therapists cannot deal with teen’s inner issues until the drug issues are taken care of. Likewise, don’t attempt to get counseling for your teen until the drugs are out of their system. It’s a waste of money and time. The best plan is to have the two therapies work hand in hand, ensuring that the ongoing support of an Alcoholics Anonymous or Narcotics Anonymous program continue in tandem you’re your teen’s counseling for emotional and behavioral issues.

Signs of Drug Use

There are many signs of substance abuse that a parent can be watchful for. These might also be symptoms of other non-drug issues, so the only way to know for sure is to require your teenager to get a full-spectrum drug and alcohol test (for many types of drugs). Have it done professionally by a local lab that processes tests for businesses and give little time for your teen to prepare for the test, since they can find many ways on the Internet to falsify the results.

A substance abuse test is warranted if you see any of these signs:

The problem lies not in recognizing how drugs might be affecting your child’s behavior. It’s easy to identify bad behavior and blame it on normal teenage emotions. The real dilemma comes from the parent not believing their child might be experimenting with or using drugs in the first place. It’s simply called denial. You may not understand the reason your child has chosen drug use as their way to “cope” with some giant in their life, but that’s another matter altogether. And because it is inconceivable that your child would ever do such a thing, you may fail to consider it, discuss it with him or drug test him to find out. If you suspect your child is experimenting with drugs, or if signs seem obvious, don’t wait around for disaster. If your teen is showing some of the signs I’ve already mentioned, I recommend that every few weeks, unannounced, you drug test your teen. Do it even when they squeal in protest and are disappointed that you don’t trust them. Easy-to-use home drug and alcohol test kits can be bought in almost any drug store. And when you test them, stay in the room. Don’t trust them to give you a valid sample. If they are getting caught up in that culture, they’ll also know ways to get around the test and they’ll have no trouble lying to you about it. Overall, they need to know you will do everything in your parental power to keep drugs from becoming a part of their history, even if it means putting them in a drug rehab program or even reporting them to the authorities and landing them in jail. Better a few days in jail than a life in the grip of drugs. If your teen is acting up, act now to test them for substance abuse. Talk to the parents of the kids they’re hanging around with to see if they are experiencing the same signs. Every day you wait is possibly another step closer to your teen becoming a drug addict or alcoholic, or worse yet, overdosing and dying. Sadly, it happens every few minutes of every day to a family just like yours. Don’t stick your head in the sand and pretend that your teen knows better than to try drugs. If you are dealing with an out of control teen, and there have been no other traumatic events or psychological problems in your child’s life, you are probably dealing with drugs or alcohol in one form or another. The sooner you know what you are dealing with, the better the chance you’ll have for finding the right kind of help for your child.

If you’ve seen an inexplicable change in your 10- to 14-year-old’s honesty, thinking, sleeping habits, behavior, grades, attentiveness, or circle of friends, it may not be normal teenage hormones.