When Your Teen Keeps Letting You Down

Home » When Your Teen Keeps Letting You Down 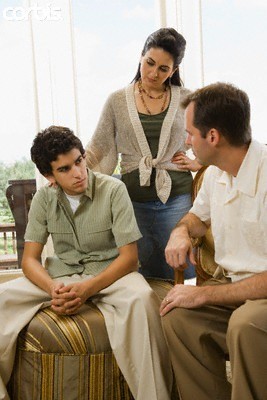 Living with a teenager usually means having to learn to live with a lot of broken promises, them getting into trouble and the tall-tales and cover-ups when they do. Most kids will let their parents down over something at some point. And if we’re honest with ourselves about our teenage years we’ll probably have to admit we were guilty of doing the same to our own parents.

The process of growing up teaches us the importance of being reliable, responsible and trustworthy. These are not often qualities we’re born with, but things we learn through experience.

As small children, we often have a lot done for us. Even if we’re expected to do simple chores around the home, we’re still not responsible for things like paying the bills, maintaining the house, emotionally supporting others, etc. But when we reach our teens we find ourselves suddenly faced with adult expectations, without having the experience and confidence to handle them with integrity and honesty. Couple this with the fact that many teens feel as though they are adults in kids clothing, thus overestimating what they are capable of, and so teens will lie, break commitments and behave in ways which can range from mildly inconvenient, to dangerous at its worst.

Using ‘Trust’ as Reward and Punishment

The typical reaction to this behaviour is to stop trusting in your child. We’re bought up to think that trust is something you hae to earn, and so if someone breaks your trust, the solution is to then take it away from them. Whilst this isn’t entirely a bad idea in itself, it can sometimes be used in the same way as a punishment, and if done in the wrong way it can leave the child with no reason to change. If you already don’t trust them, and if they’re left believing that you don’t like them or even love them anymore, what more do they have to lose from the relationship?

Seeing Them For Who They Really Are

However hard it might be to keep believing in your child after they’ve lied about where they were, or been out drinking whilst they’re under age, or worse, if you give up on them completely you may find that they also give up on themselves.

It’s important to try and see past the temporary bad behaviour to who you know they really are underneath. A teenager has no reason to believe in their own goodness if nobody around them can see it. In fact, until someone recognises that they are good underneath, they probably won’t know it for themselves at all.

Rather than telling your child that they’re bad and don’t deserve your faith in them, it can do the world of good to say instead that you’re not going to stop believing in who they truly are underneath all the nasty stuff, and that you’ll keep expecting them to do the right thing even if that means they end up letting you down again. Because you know that one day they will prove you right. It doesn’t mean you’re willing to become a doormat and let them walk all over you. It means that you are differentiating between what they’re doing and who they are.

We all make mistakes, and there have been times in all of our lives when we perhaps didn’t do the right thing. But that didn’t make us bad people.

Although we often have to do something to make up for what we’ve done, it helps us if we know there is someone who still believes in us. Wanting to make someone proud of us is a bigger and more rewarding motivation that trying to earn back broken trust.

To a mixed up teenager, trying to make someone trust you again can seem as difficult and impossible as climbing a mountain. Some won’t bother trying, and the relationship can remain damaged for a long time. However, when your child can show you that you were right to believe in them, that is more like coming home. It’s the difference between shutting the door on your child and requiring them to earn their way back in, and leaving the door open for them for when they’re ready to step up and be an adult with you.

When Your Teen Keeps Letting You Down